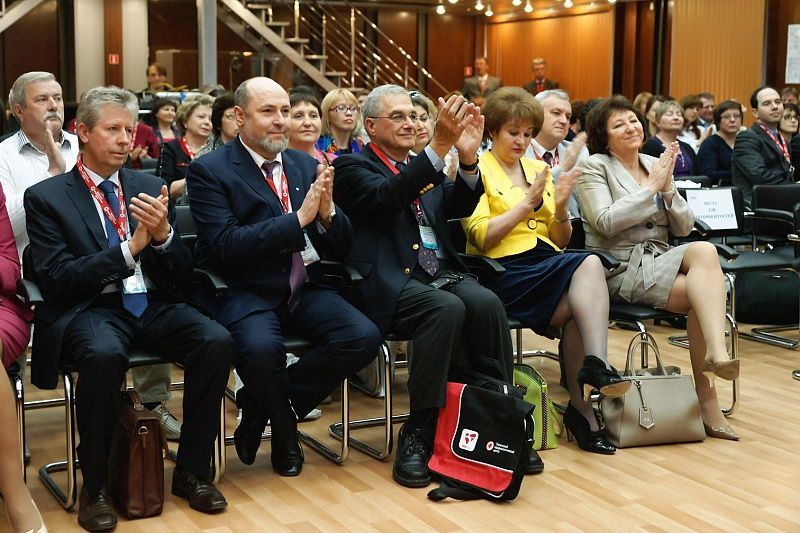 The event was held

The Forum drew in excess of about 600 participants from 34 cities of the Russian Federation and countries of near and far abroad. The Congress did not fail to attract the world’s best professionals from the USA, Germany, the Netherlands, Israel and other countries, as well as scientists from Moscow, St. Petersburg, Tomsk, Novosibirsk, Omsk and Tyumen to come together to address the global issues in cardiology that we are facing today.

During three days cardiologists, neurologists, endocrinologists, surgeons, pediatricians and other specialists talked over the latest advances and problems of modern medicine, shared their experience, discussed prospects of international cooperation.

One of the most expected guests was the Co-President of the Congress, world-famous scientist, the real legend of cardiac ultrasound Professor Nelson Schiller, MD, FACC, FRCP, Chair of Cardiology Department of the University of California Medical Center (San Francisco, USA). Nelson Schiller is one of the authors of a manuscript “Clinical Echocardiography”, very important book for every Russian specialist in cardiovascular ultrasound. “I’ve been travelling to Tyumen for more than twenty hours with two flights: San Francisco – Munich and Munich – Tyumen, but that was worthwhile, - shared his impressions Professor Schiller. – I see so many interesting people here! Besides, I had an opportunity, when driving from the airport, to have a look at your city – it is very clean, nice, with good roads. Listening to the lectures here, I noticed that everyone is using the same literature, our methods of treatment are very similar, and the thrust is in uniformity. Perhaps politically everyone is different, but in medicine it is exactly the opposite. We are united by one common goal - to treat our patients.”

The Congress-2014 was a great success and gained an overwhelming response. “Every year I come to this Congress with great pleasure. Being a practitioner I get a lot of advantages of this participation. It is a unique opportunity to obtain answers to many questions. Themes are always very interesting, - told Gennadiy Komar, cardiologist from Snezhinsk city (Chelyabinsk region). – I’d like to pay special attention on lectures of world-famous scientists Nelson Schiller and Eli Ovsyshcher. They know how to keep the audience's attention. It was like a performance. It is amazing when a speaker provides the most up-to-date information during his presentation. Sometimes it was a difficult choice for me what lectures to visit because it was impossible to attend all.”

At the second day of the Congress the literary-musical section “Diagnosis: Poet” was held. Doctors of different Russian cities presented poems and songs of their own composition. Igor Oboldin, MD, PhD, Head of the Cardiology Department of City Ambulance Hospital (Shadrinsk city) said: “The staff of Tyumen Cardiology Center is very friendly. Their work makes their life; they fill you with optimism and enthusiasm. After communicating with your specialists you want to progress, create, and develop. I regularly visit the International Congress “Cardiology at a Crossroad of Sciences”. This year lectures of echocardiography and cardiac resynchronization therapy were especially interesting to me. It's really precious to learn about the world’s leading scientists’ experience. With great pleasure I participated in the literary-musical section “Diagnosis: Poet”. That was an excellent idea to organize it! Vadim Kuznetsov is a very creative man and it is wonderful that he has been constantly inventing something new and unusual, maintaining all the traditions.”

Famous scientists also praised the work of the organizing committee. “In St. Petersburg we are envious how your Congress is arranged. For example: the event was not finished yet, and you have already released a movie about everything that has been happening here. It is an indicator of high-class organization, - told Yuriy Shubik, MD, PhD, Professor of Chair of Cardiology of St. Petersburg I.I. Mechnikov State Medical Academy, Head of the Northwest Center for Diagnosis and Treatment of Arrhythmias at the Closing Ceremony. – Tyumen Cardiology Center was able to organize a forum that could rival its neighbours at first, and then has even outstripped them.” Yuriy Shubik chaired “School on Cardiac Arrhythmia Diagnosis and Treatment” at the Congress.“We have few arrhythmologists, so it was interesting to learn about new approaches in this area, - said Olga Perepelitsina, cardiologist from Perm. – I have participated in various conferences and got used to the fact that they are held in quite conservative, dryly way, and you present the necessary creativeness. That is great!”

For the first time doctors from the Crimea visited the Congress: surgeon of the Department of Invasive Cardiology and Angiology Maxim Minakov and cardiologist Maxim Glukhov (Simferopol, Crimean Republic Institution "University Hospital", "Center of Cardiology and Cardiac Surgery"). During their visit to Tyumen specialists from Simferopol attended several high-tech operations in leading Tyumen clinics: Tyumen Cardiology Center and Federal Center of Neurosurgery. Main task of the trip was to exchange experience with colleagues, learn about the capabilities of Tyumen medicine, and discuss prospects of cooperation with Russian and foreign cardiologists.

The Congress continued its tradition and contained the contest of posters presentation, involving 58 studies of scientists from 16 cities: Almaty, Tashkent, Aktobe, Minsk, Lugansk, Kharkov, Tyumen, Tomsk, Omsk, Kemerovo, Ivanovo, Barnaul, Chelyabinsk, Ekaterinburg, Irkutsk, Chita.
The jury consisted of eminent scientists from Israel, Moscow, Tomsk and Tyumen. Chairman of the international jury Victor Todosiychuk, MD, PhD, Head of Functional Diagnostics Department announced the winners at the Closing Ceremony: “Dear colleagues, the contest included a large number of poster presentations from different cities. Jurors note that the level of all works was rather high and it was extremely difficult to sel ect the best three reports.” The first place was given to the team of scientists and doctors from Tomsk, Research Institute of Cardiology, Siberian Branch of RAMS (authors: E.N. Pavlyukova, E.K. Tereshenkova, R.S. Karpov), who presented two reports devoted to diagnosis of heart changes in such widespread pathology as arterial hypertension. The second-place diploma was given to Tyumen Cardiology Center’s scientists (A.M. Soldatova, V.A. Kuznetsov, T.N. Enina, T.I. Petelina). The third place was given to the report of doctors of Yeltsin Ural Federal University (Sverdlovsk Regional Hospital No.2) and Ural State Medical University, Ekaterinburg (theme: “Influence of localization of left ventricular false tendons on regional myocardial function”, authors: K.R. Mekhdieva, Yu.A. Zinovieva, V.E. Timokhina, F.A. Blyakhman).
“Traditionally, we have to say that everything has an end – both good and bad. Today the good ends – that is our Congress, - told Director of Tyumen Cardiology Center Vadim Kuznetsov at the Closing Ceremony. – I am pleased to note that the Congress gathered a big number of participants from different cities and countries, many lectures and reports were presented, 300 scientific works included in the Abstract Book. We thank everyone who took part in the Congress – our foreign guests and participants from different cities of Russia. I thank the entire team of Tyumen Cardiology Center for great organizational work. We invite everybody at the VI Congress “Cardiology at a Crossroad of Sciences” being held here next year fr om 20 to 22 May.”

Next year Tyumen Cardiology Center is celebrating one more significant event – the 30th anniversary of its founding. 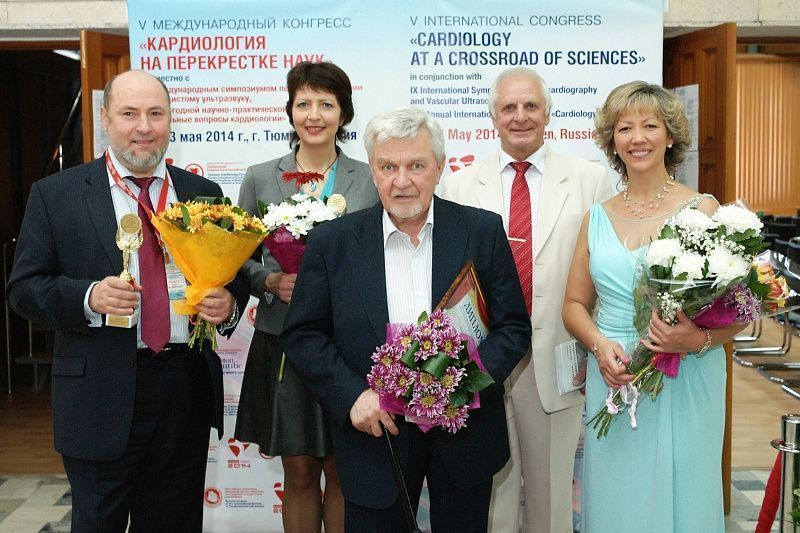 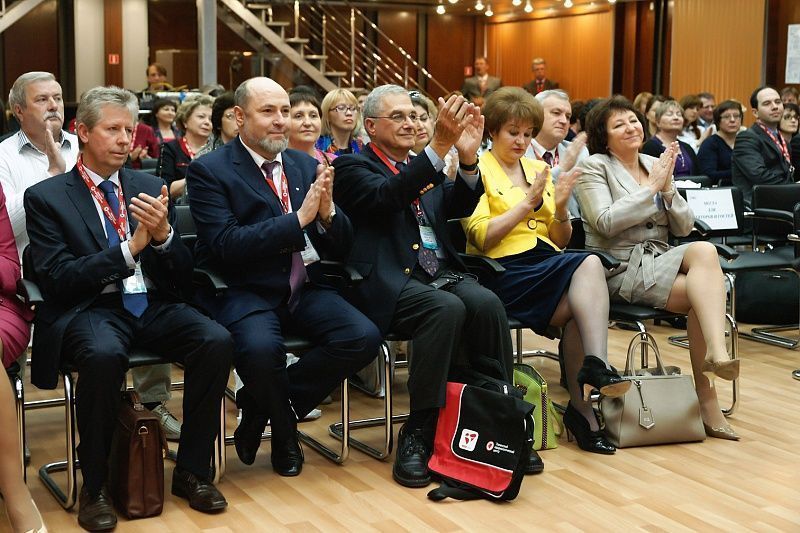 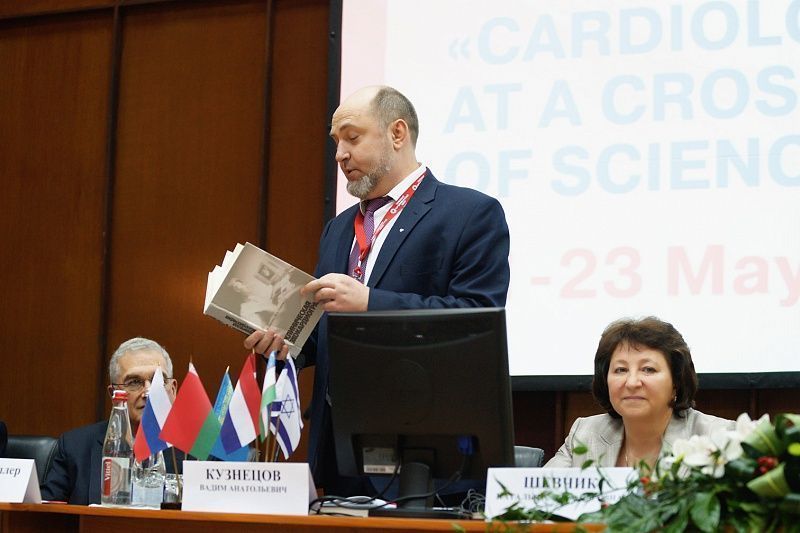 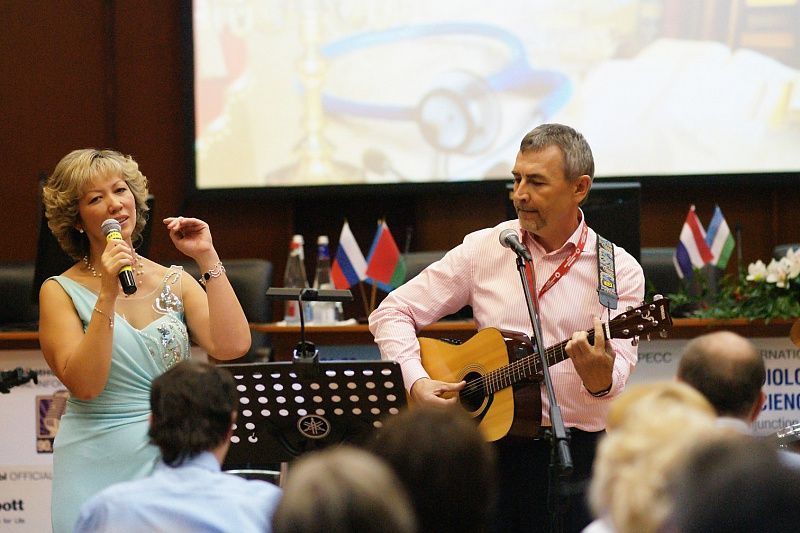 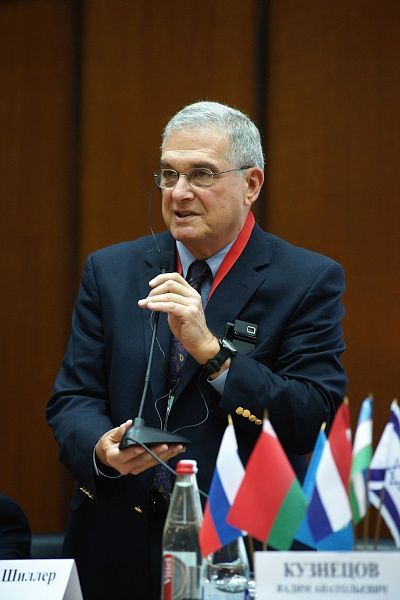 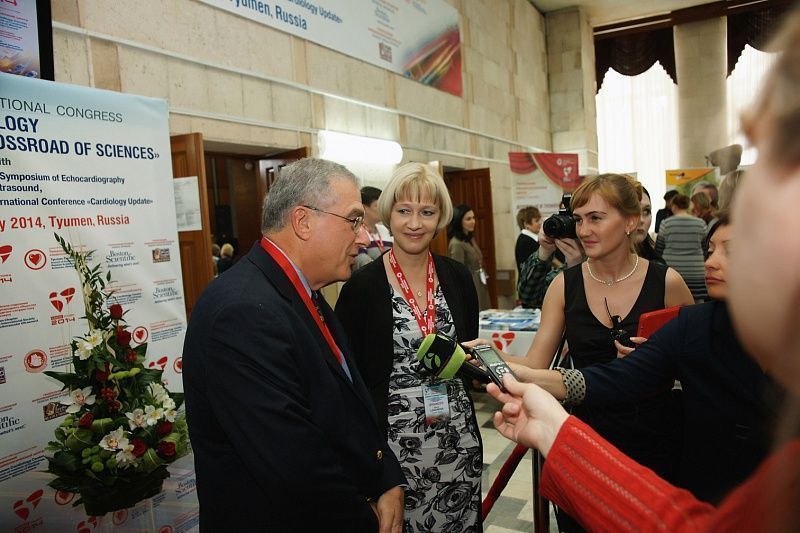 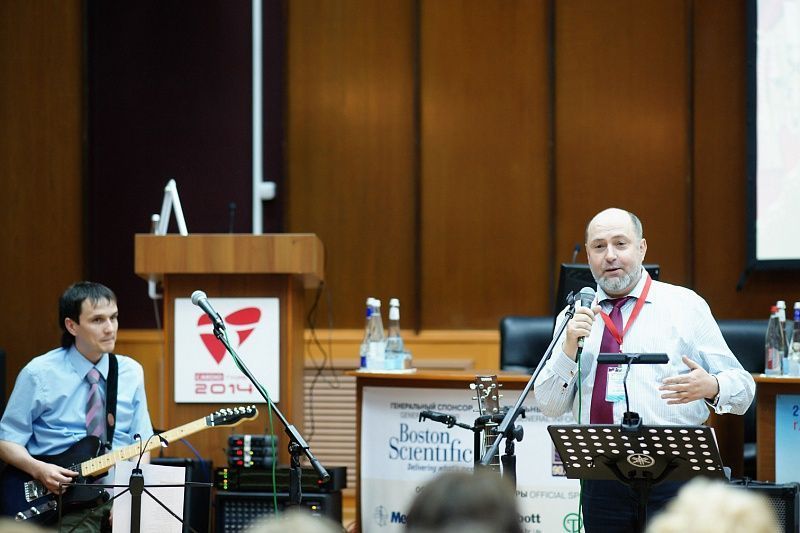 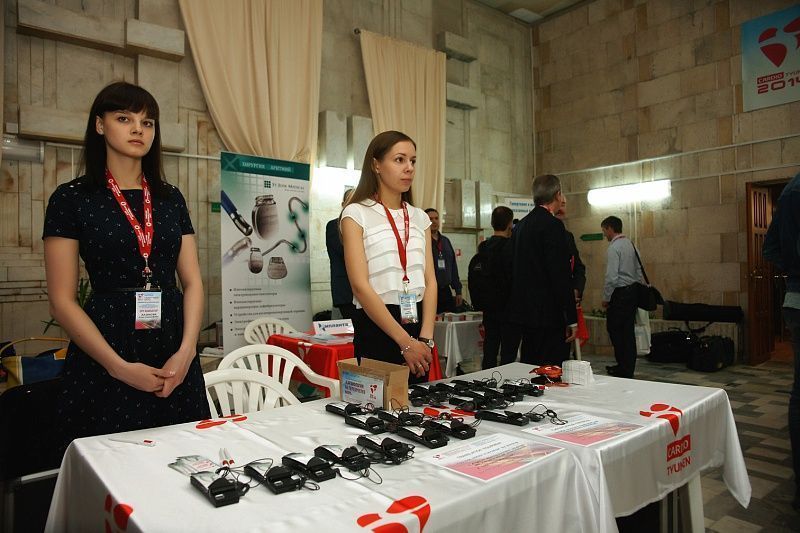 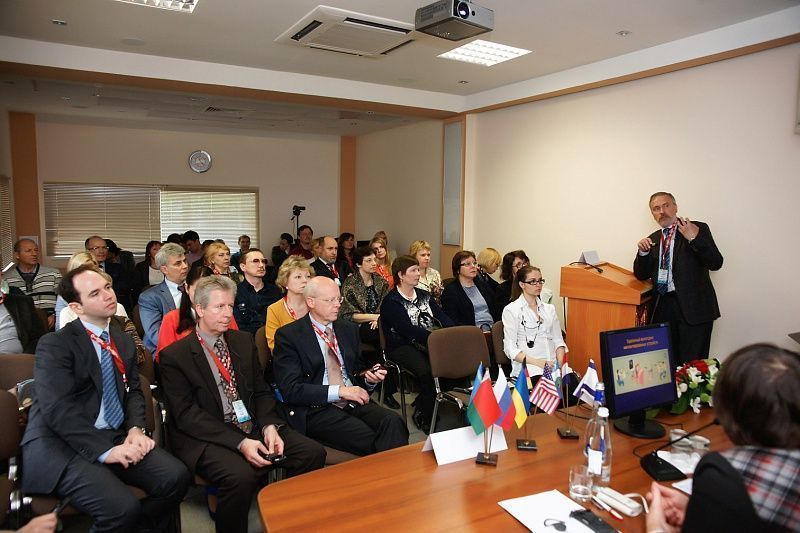 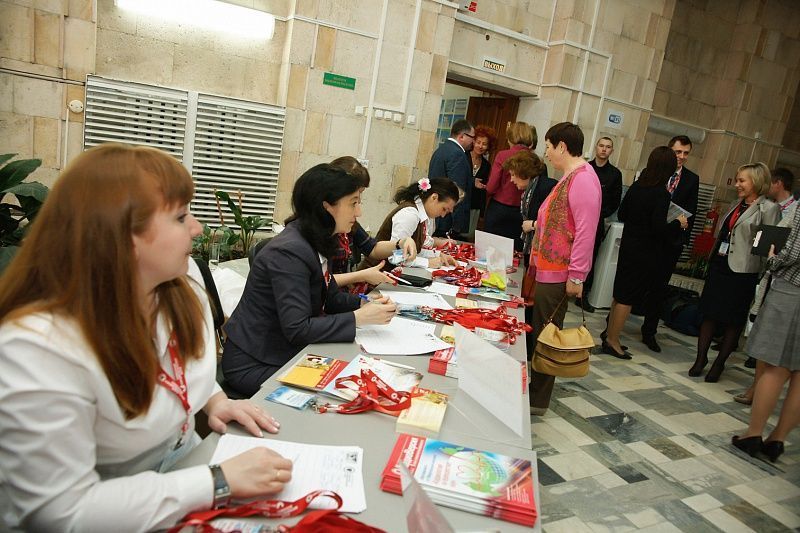 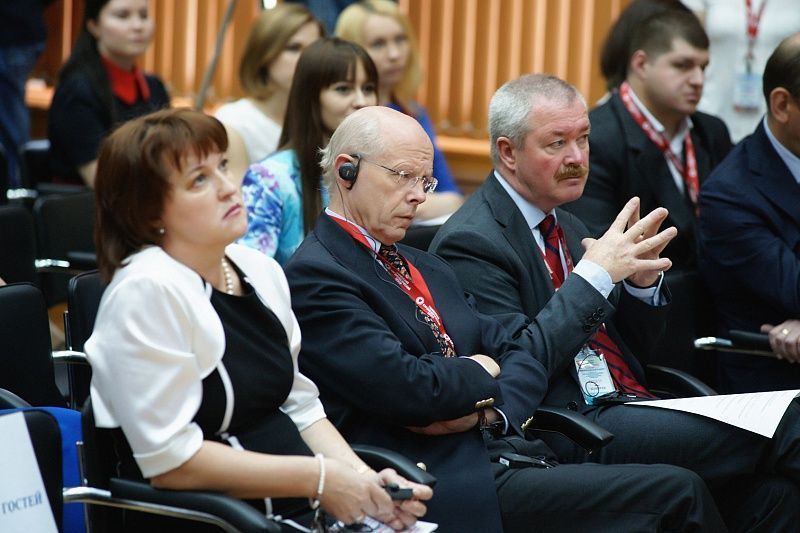